Opened for tourism since 1974, after the coronation of the Fourth King, His Majesty Jigme Singye Wangchuk, Bhutan is perhaps one of the world’s most exclusive tourist destinations.

Though there are many countries that proclain the uniqueness of their traditions, it is ofen artifically preserved just for tourists’ eyes. Whereas in Bhutan it is very much real. Visitors can see, feel, and experience their tradition.

In a world where a thick cloak of globalization has all but smothered distinctive heritages, this self-reliant kingdom proudly stands alone. The arts, ceremonies and festivals in Bhutan are not remnants of a bygone age but are actually being practiced and performed as they hold a religious and spiritual significance to the locals.

As per Royal Government of Bhutan Tourism Policy, all tours to the country have to be pre-planned, pre-paid guided package tours for which the tariff is set by Tourism Council of Bhutan. The package includes services of accommodation, local transport, guides, meals, entry to various sites, Government royalty & other taxes. Supplementary prices is applicable for Deluxe and luxury hotels. All tours need to be booked in advance through local Bhutanese tour operators who will take care of all ground arrangement including the visa. There is no restriction on the number of people travelling and even single person is welcomed.

Bhutan at a glance 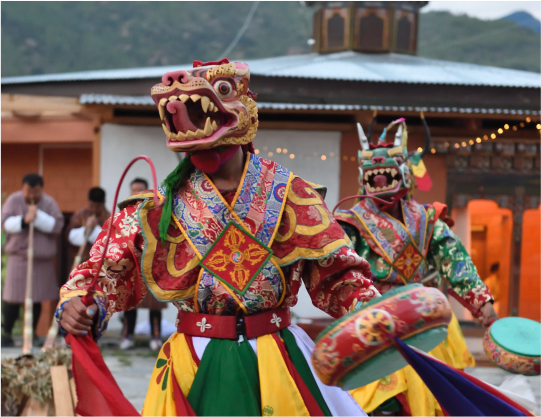 The weather in Bhutan varies with the altitude. In the northern parts of the country where mountains rise up to 7,000m, weather conditions are similar to the arctic and get snowfall two to three times every winter. Southwards, closer to India, the weather is hot and humid in the summer and cool in winter. The monsoon rains are usually heavy. The east is also warmer than the west. The central part of the country enjoys sub-tropical climate with very cool winter.

The best times to visit Bhutan are in Spring (March-May) and in Autumn (late September – November) when the weather is warm, dry and sunny.

The months of January and February are colder, but from March until April the climate remains dry and pleasant. In late spring the heat and humidity increase but at this time the famous rhododendrons bloom spectacularly and flood the valleys with colour.

From June to September the monsoon rains cover the mountains and one may find it difficult to explore the places. If one is interested in seeing the rare black-necked cranes, it is recommended that you visit the Phobjikha Valley between late October and mid-February.

Bhutan is cold during the months of December to February, with most days clear and sunny with very little rainfall. During the winter months, warm jackets, waterproof jackets, thermals, gloves, sunhats, sunscreen & sunglasses are recommended.

During a typical day, you may choose to wear a shell jacket with a fleece or wool sweater underneath along with a shirt or T-shirt or jumper and long pants.

Due to the hilly terrain in most parts of the country, good quality leather or waterproof fabric boots/shoes with good soles are recommended. One should also carry a good pair of waterproof walking shoes for regular use.

When you visit the monasteries and temples, do not wear fancy hats, shorts or sleeveless tops/t-shirts. Shoes always have to be removed outside before entering any shrine or temple, however socks are allowed.

Smoking, consumption of alcohol or any narcotic in and around temples/monasteries or other religious monuments is a taboo and so is shouting, yelling, laughing or talking loudly in and around these religious areas. When visiting any temple or monastery, small donations are welcomed.

The women there prefer to dress modestly, so try to avoid low-cut tops and sleeveless tops. Very short or tight fitting clothes are considered inappropriate in public areas in most Asian countries. Therefore we recommend light-weight, loose fitting trousers or skirts. Even at dinner, it is rare to dress up.

The consumption of tobacco is not altogether prohibited in Bhutan, though it is largely banned in places of public accommodation. However consumption of liquor is allowed in private.

All tourists except SAARC country residents, must obtain a visa clearance prior to travelling to Bhutan. Visas are processed through an online system by a licensed Bhutanese tour operator that you can contact directly or through a travel agent.

One is required to send a copy of the photo-page of their passport to the tour operator who will then apply for the visa. The visa will be processed by the Tourism Council of Bhutan (TCB) after the full payment of the holiday (including a USD $40 visa fee) has been received in the TCB bank account. Then the visa clearance will be processed within 72 working hours.

When entering the country, you are required to show the visa clearance letter after which the visa will be stamped on the passport.

Upon entering Bhutan, all foreigners are issued a 7 or 14 days of "Entry Permit" by default, which is valid only for Thimphu and Paro. The rest of Bhutan is considered as restricted areas and foreigners need a "Restricted-Area Permit" to enter those places.

Visa / Entry Permit is subject to change and depends on the Government policy. Our team will provide you with the exact details on your query about this important & crucial aspect of your travel.